The drivetrain, like the motor controller, has evolved extensively since the boards we built before Kickstarter. We’re going to take you through some of the principles and constraints that have guided our design, along with the modifications, prototyping, testing, and manufacturing we've worked on in the last year. 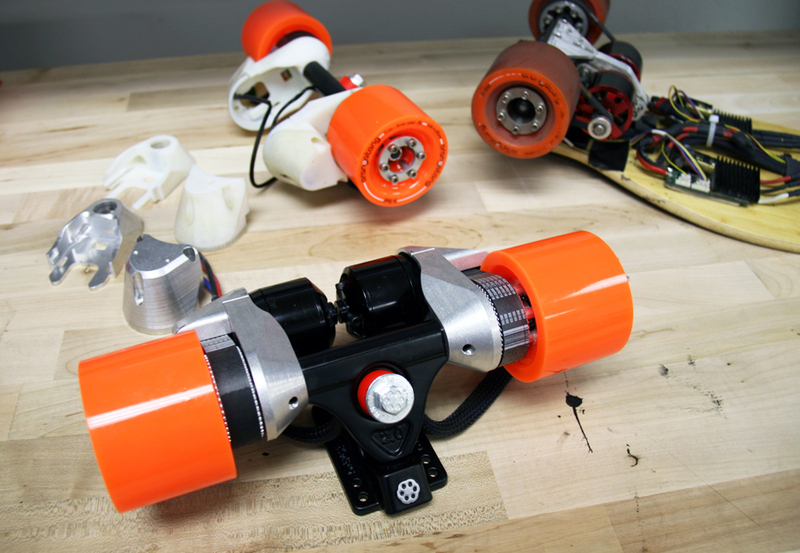 One of the most important and unique aspects of Boosted's design is how it maintains the riding experience of a high performance longboard. A good longboard's deck, trucks, and wheels have flex and handling characteristics that are carefully designed. For this setup, that means they were dialed in by the designers, engineers, and longboarders at Loaded, Gunmetal, and Orangatang. We chose these components because they work together to create an amazing carving experience. 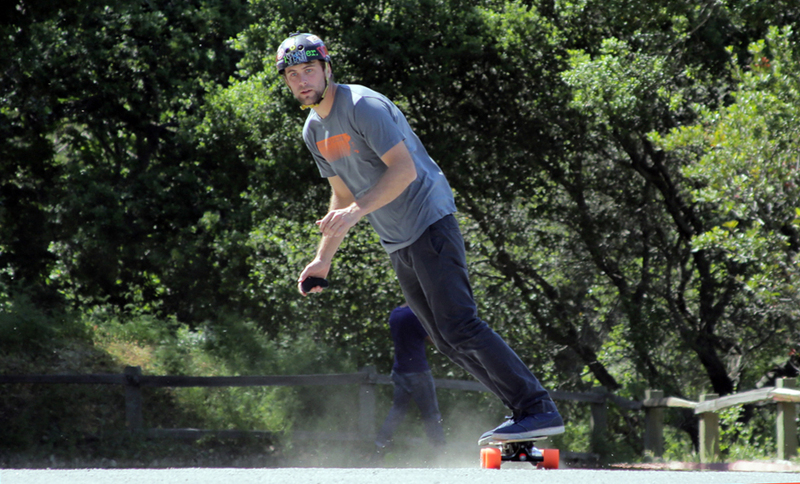 Maintain the look and feel of a longboard

Second, the drivetrain needs to be powerful, controllable, reliable, and lightweight. That means enough power to conquer steep San Francisco hills or slow down quickly. It has to operate quietly. It should feel natural to ride, easy to learn on, and fast when you need it. The way we test this? If our beta testers ride it and aren't blown away, we go back to the drawing board.

We also wanted to maintain the look of a normal longboard. There's something beautiful and pure about a longboard that we didn't want to ruin, so we've been careful to make sure every part we design is as compact and integrated as possible.

So we started with three design principles:

Since our first prototype, we’ve always used dual brushless outrunners in a symmetric configuration. Brushless motors are better than standard brushed ones because they’re quieter, more reliable, and much more powerful for their size. An outrunner motor, where the magnets and outer casing spin around the stationary coils, provides more torque and requires a smaller transmission ratio. 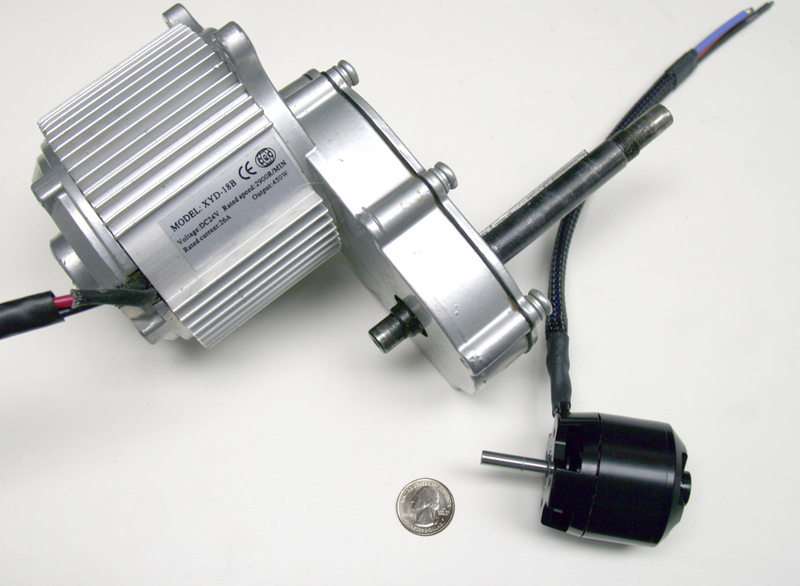 For quick braking and smooth starts, we’ve added sensors that measure each motor’s angular position and speed. The sensors are connected to our motor controller, which ensures that both motors are balanced and smooth. The sensors must be mounted co-axially with the motor shaft and have to be protected from shock and vibration to ensure an accurate measurement, so we designed billet aluminum "end caps" to house them. 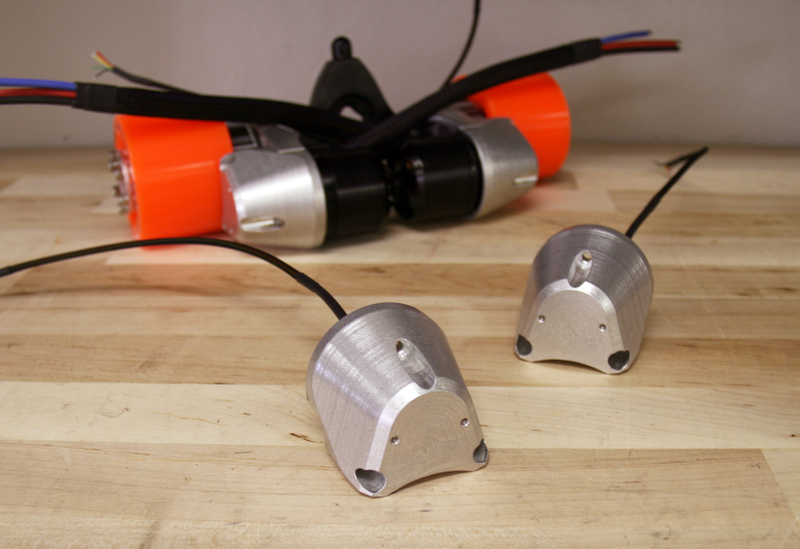 Using a dual motor setup means two small motors instead of one large one. These smaller motors allow the board to stand at a normal longboard height while avoiding clearance issues with the ground and the deck. Two driven wheels also means power gets applied over twice the contact patch of a single wheel drive system, giving you better traction and a reduced risk of unintentional sliding. Finally, having a symmetric drivetrain prevents torque steer under hard acceleration and braking and provides an equally balanced ride when carving hard left or right. 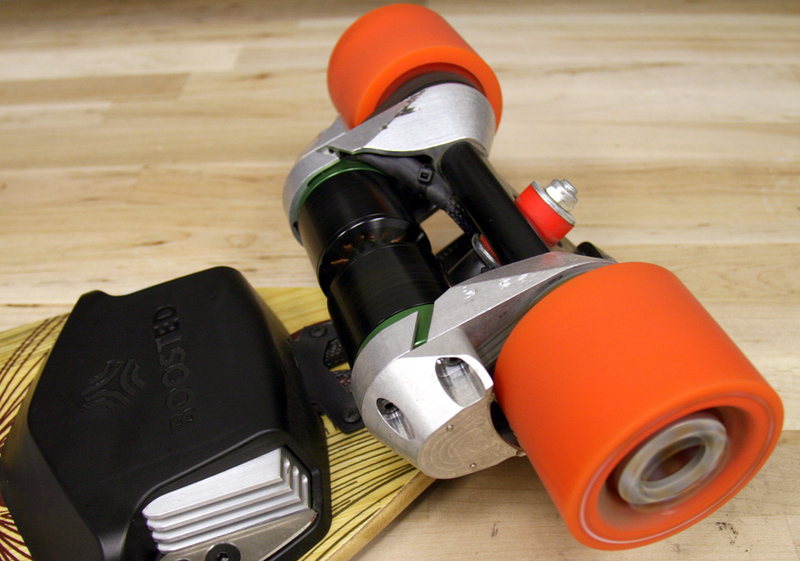 Motor specifications are very different across manufacturers, which we discovered after building prototypes with different motors and seeing inconsistent performance. To compare motors more accurately, we built a benchtop dynamometer, or dyno, that powers each motor with an identical test load and measures each motor’s performance (speed and torque). We then calculated motor efficiency and safe operating conditions for 12 different motor samples, and picked the best one to move forward with. 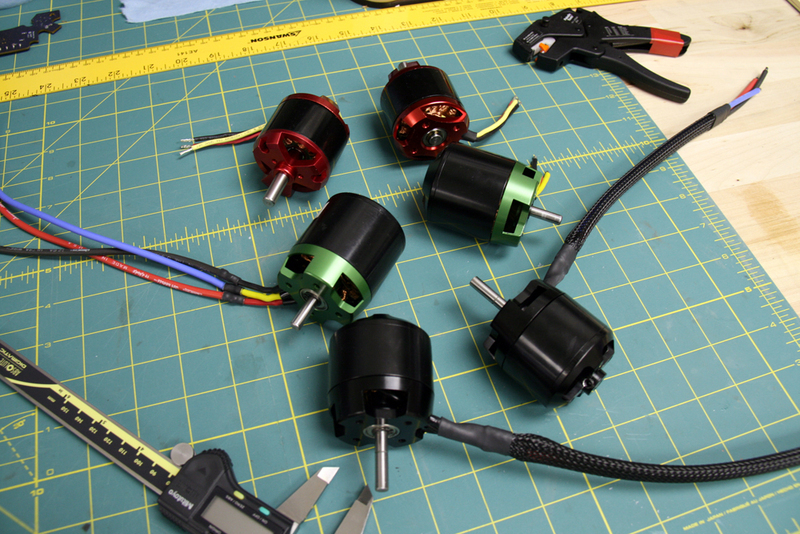 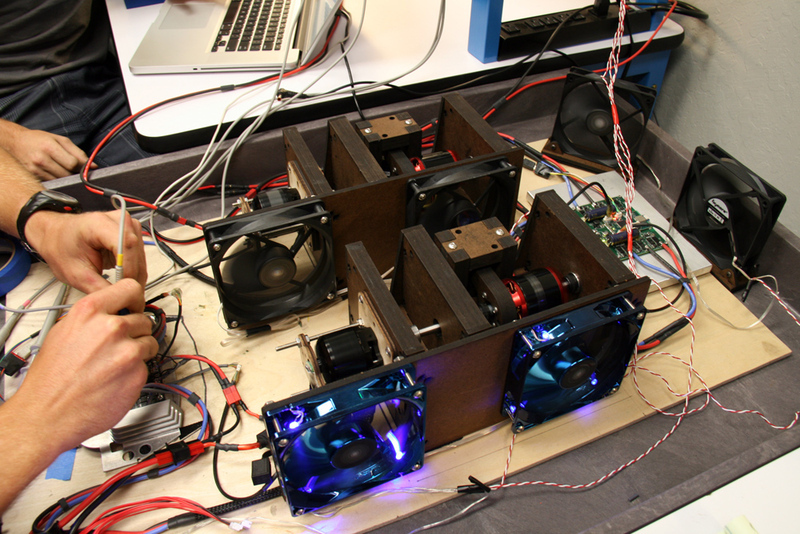 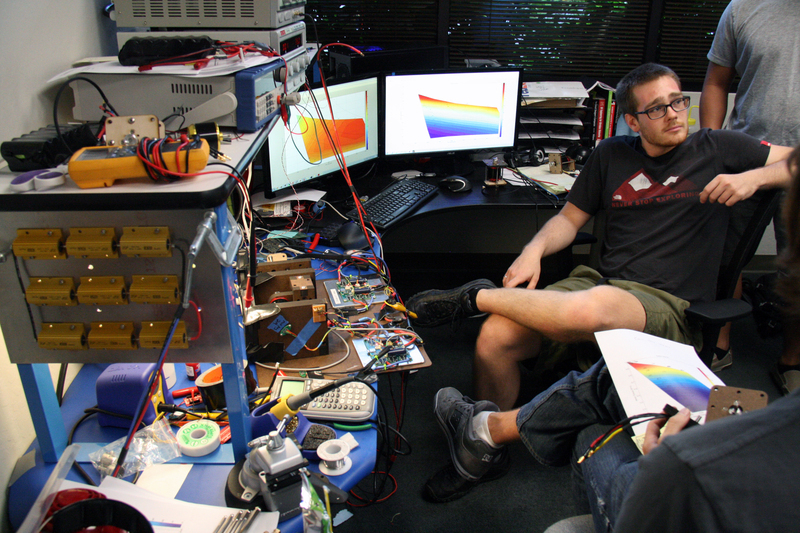 All mechanical parts started as sketches in a notebook before a 3D CAD model was rendered. The models were assembled together in the CAD software to check for fit, clearance, and interference. Once we were comfortable with a design on the computer, we 3D printed each part and assembled them into a drivetrain. We confirmed all of our clearances and looked at how the drivetrain would be assembled, but couldn’t actually ride on these because the 3D printed plastic would break under riding loads. So the final step was machining of these parts using a CNC mill and assembling them into a working drivetrain. To give you an idea of how many iterations it can take, just our final design (see ‘Third Generation’ below) went through 8 revisions alone. 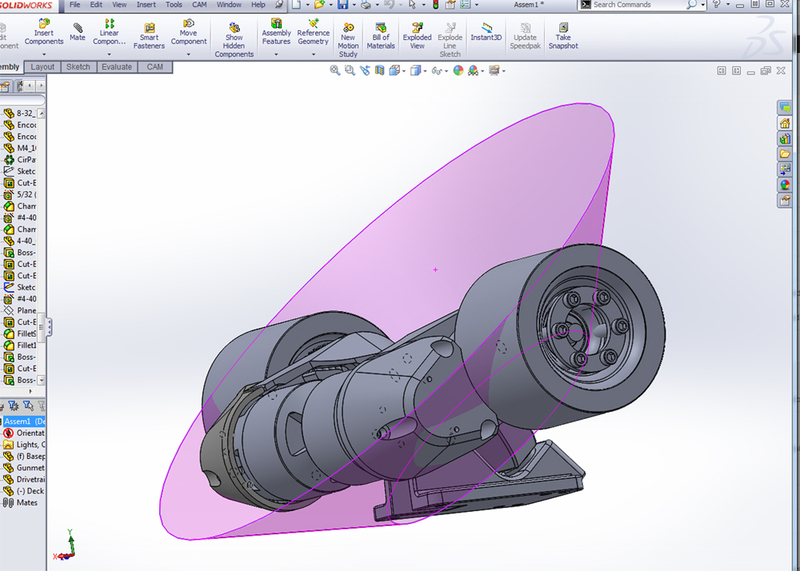 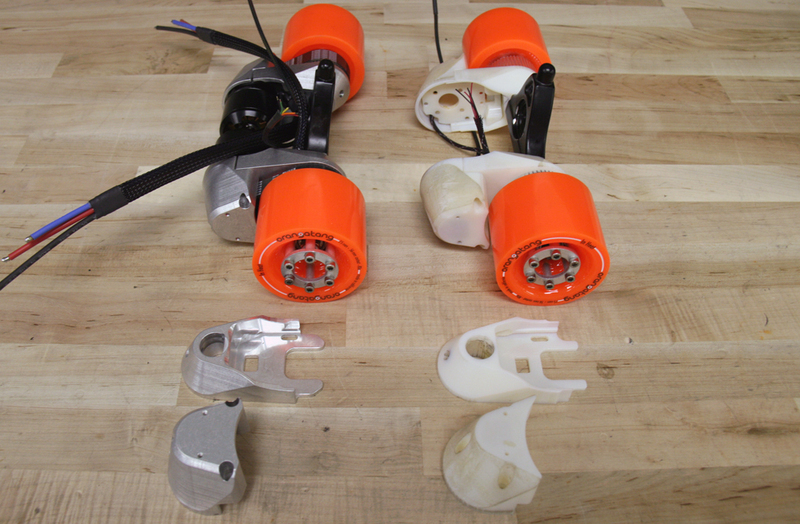 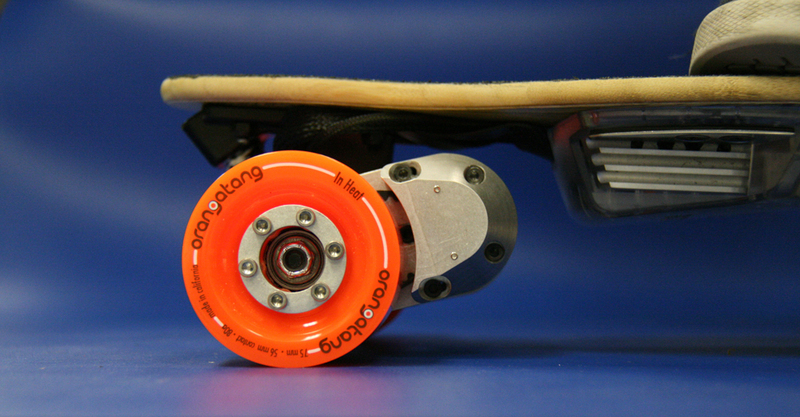 Testing for drivetrain-deck clearance with a 185 lb rider

The Evolution of the Design

Our first design supported the motors in the center of the truck while the belts connected out at the wheels. This worked great for our prototypes, since it was simple and lightweight. But it had several problems, like uneven belt tensioning under load and unusually high loads on the motor bearings, which resulted in belt slip during hill climbing and eventual bearing failure. After seeing these issues in an early batch of test boards, we decided to redesign this drivetrain for the Kickstarter boards.

Moving the motor mount closer to the wheels resulted in less flex in the motor shaft. This increased bearing life in the motors and allowed more belt tension to prevent slip, but it also required us to find a better way to attach the motor mount to the truck hanger which wouldn’t slip from the high torque. The sensors, which were originally housed in the center support, were moved to outer caps, which also prevented “motor bite” during hard carving. This was used on both the first and second beta builds with some minor changes between them. 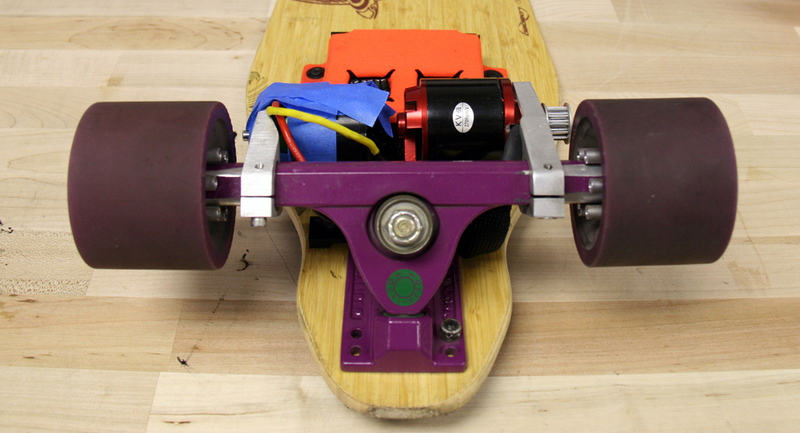 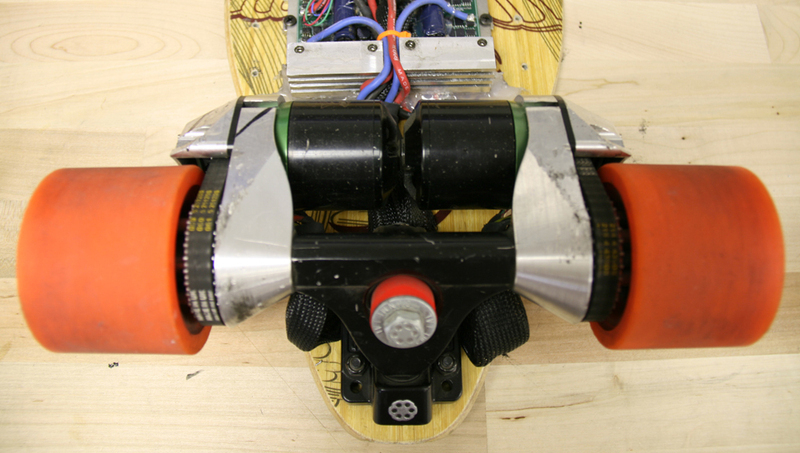 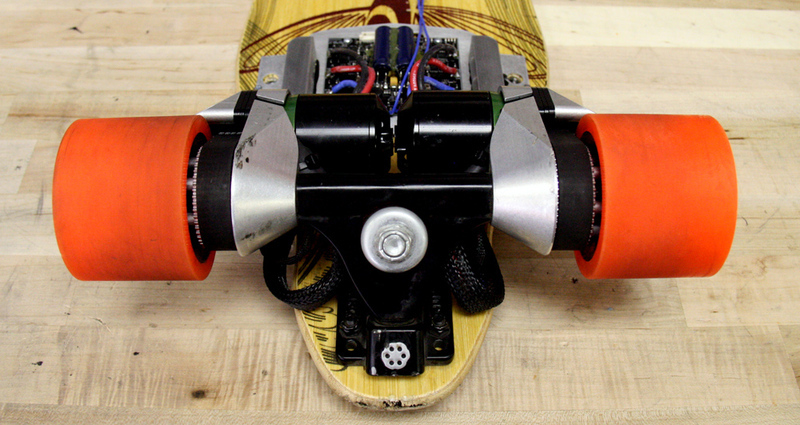 At the end of our second beta run, we realized the belt should be wider and smaller pitch to both maximize belt life and reduce slip. For our last build, we used the results from the motor tests to select a motor that's shorter but still powerful enough, which allowed us to change the transmission pulleys and fit the wider belt. An extra bearing was added to improve motor bearing life, and a spring-loaded tensioner was designed to keep the belt properly tensioned after servicing. We've finalized small details like wire routing and assembly fixturing, so barring unexpected issues, this will be the drivetrain we ship in our production boards. 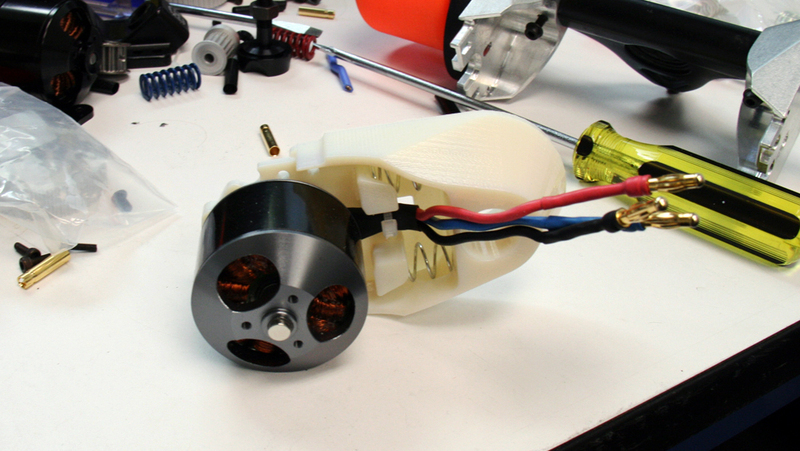 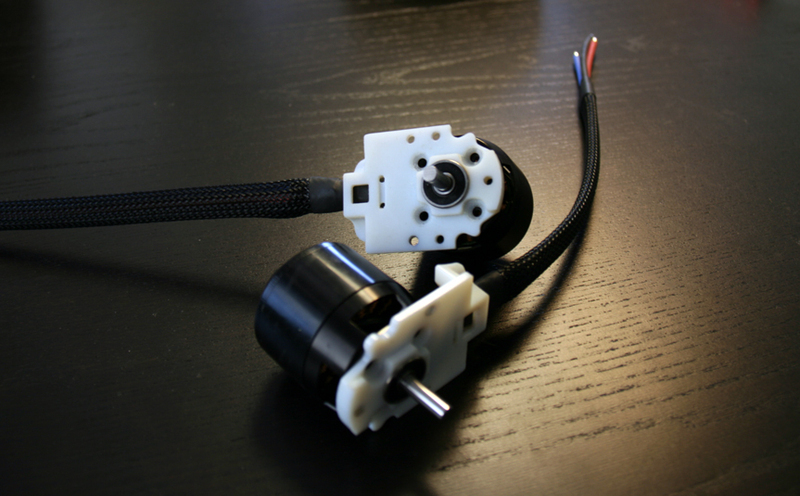 An extra bearing on each motor mount to increase reliability 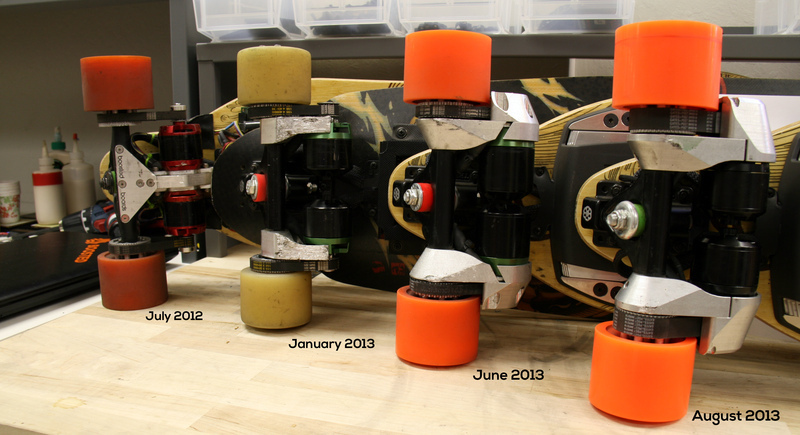 As you can see, going from a prototype to production requires an incredible amount of design and engineering effort, and it involved our team's industrial designer, mechanical engineers, and electrical engineers. We're in the final stages of testing, and we think the end result meets the design criteria we started with:

Our next update will be about our lithium battery, which we're in the middle of bringing up right now. Also, be sure to find us on Facebook and sign up for our newsletter to be the first to see sneak peeks of the final design!

Want to get in touch?  Email us at community@boostedboards.com