The motor control electronics have changed significantly since our Kickstarter campaign, and today we're going to show you their evolution from prototype to (almost-)production. This has involved the design of printed circuit boards (PCBs), the software in the motor controller, and the mechanical design and manufacturing of the heat-sink and protective cover. 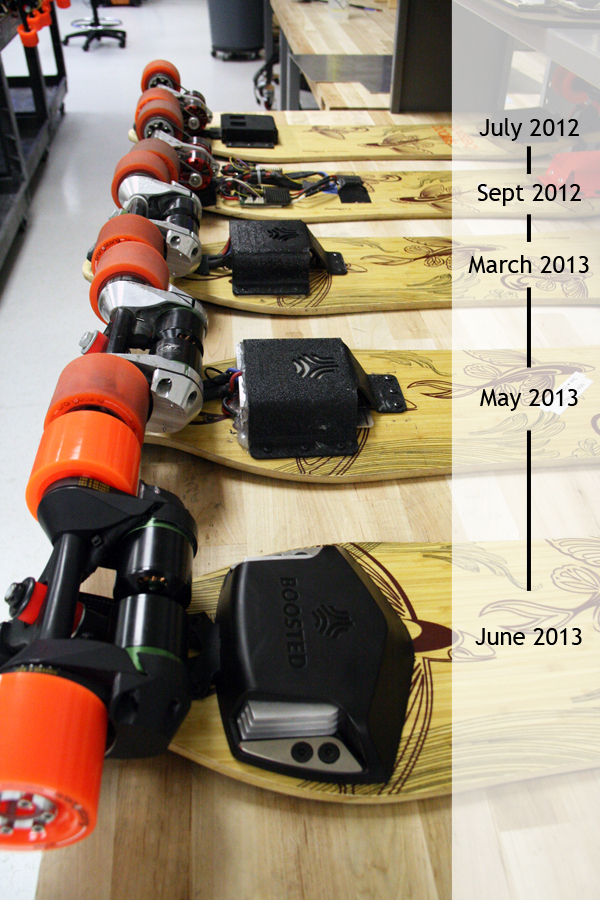 Evolution of prototypes, starting with the initial off-the-shelf electronics version and progressing through custom electronics revisions

Boosted's drivetrain uses brushless motors, which are smaller, lighter, quieter, and more powerful than normal brushed motors. The trade-off is they require more advanced hardware and software to correctly control them.

The first batch of boards we built last summer used off-the-shelf motor controllers, a small custom PCB, and an Arduino. These were all enclosed in a laser-cut acrylic and cloth enclosure and controlled by a hacked wireless Nintendo Wii Nunchuck. Testing with these units was invaluable, but major problems made them difficult to use and required frequent repairs and maintenance. Issues included:

We listened to feedback from our early testers and thought about the safety implications of some of these problems, and we realized that we couldn't use these off-the-shelf electronics for our Kickstarter boards. So we began working on a completely custom motor controller from scratch that could handle the high power output of the motors and still provide low-level software control of the riding experience. 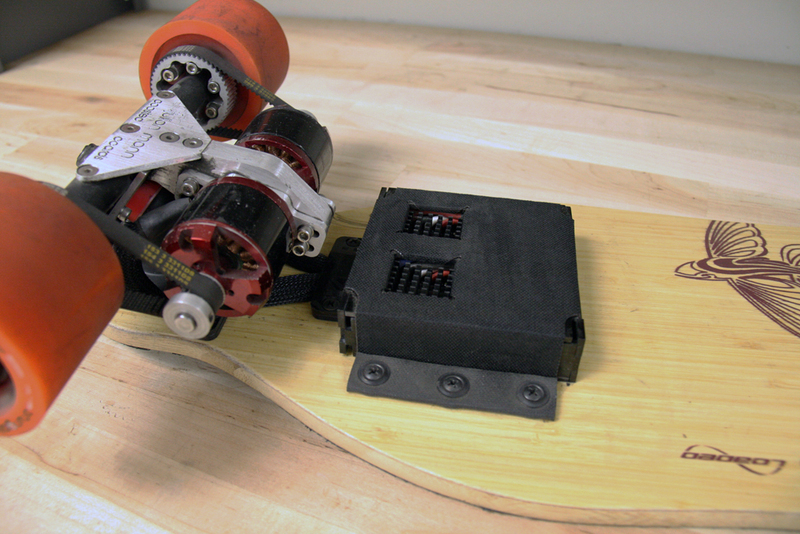 Early prototype board with off-the-shelf electronics that weren't usable for Kickstarter boards.

Our first custom motor controller used one PCB and microprocessor for each motor and was controlled by software that we wrote in C. We left off a protective cover to maximize airflow and used connectors between modules so we could swap parts if anything failed. Despite some problems, the end result was a functional motor controller that provided smooth start-stop, reverse mode, quieter operation, and torque control instead of speed control of the motors, all of which were praised by our testers when compared to the off-the-shelf prototypes. You can see one of these custom prototypes in the photo below. 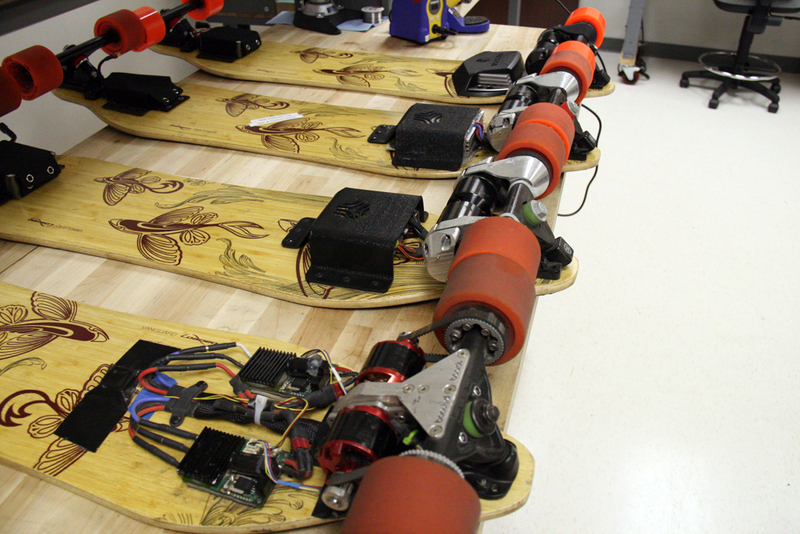 Over the next few months, we fixed issues with the custom design and added important hardware, such as a current sensor and an integrated radio receiver. We also compressed everything onto a single PCB and microprocessor. After some intermediate test units, the first batch was built up in April and delivered to our initial beta customers. Along with field testing the betas with some of our Kickstarter backers, we've tested them ourselves and watched for issues due to electrical stress from high currents and motor loads or mechanical stress due to shock, vibration, and flex from riding. We've also brought the beta boards back into our shop for regular inspections and tune-ups. 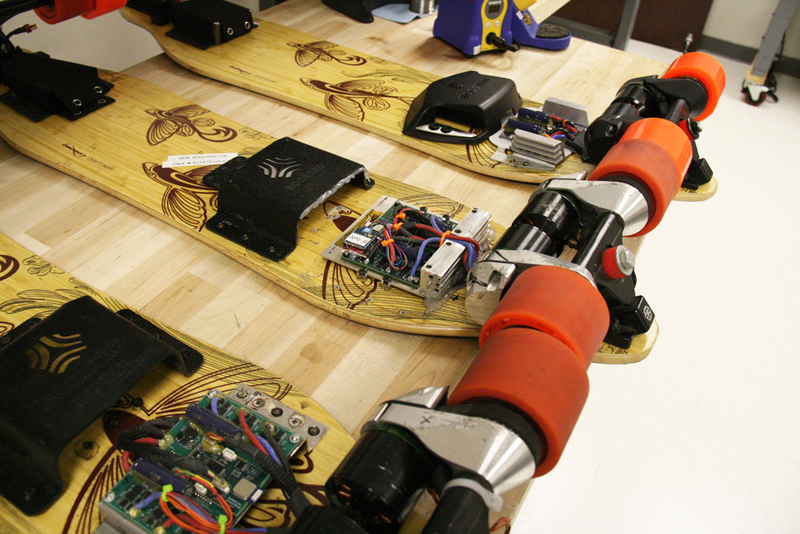 Our physical cover design wasn't ready for molding yet, so we quickly made temporary covers by heat-forming sheets of laser-cut ABS. The beta units all had a flat sheet heat sink, while in our lab we started experimenting with finned heat sinks for better cooling.

The next revision of the PCB saw many small but important changes that shrank it, improved its performance, and made it more reliable.  Software has been tweaked and can be updated on earlier beta boards in our shop. And the mechanical design of the cover and heat sinks progressed from sketches to CAD models to paper mockups to 3D printed plastic and finally injection molded plastic and machined metal. This process involved long hours spent by John, JF, and George both in CAD (using Solidworks) and with physical mockups to ensure proper fit. 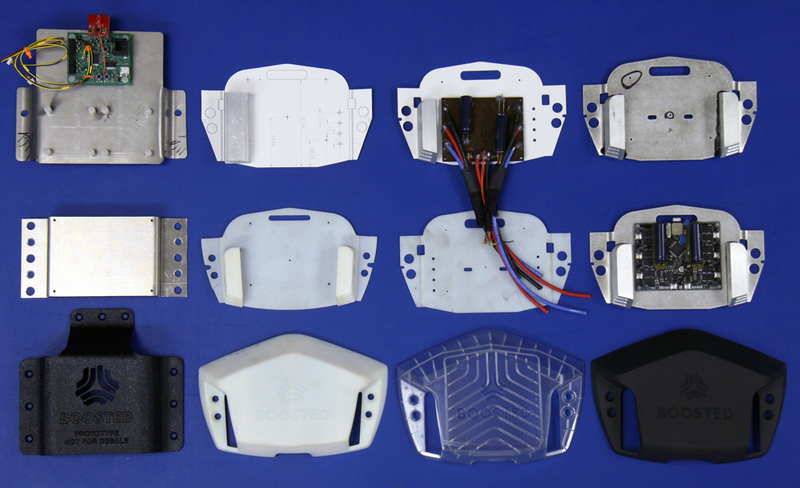 Various stages of the electronics enclosure design: including paper, heat-formed plastic, 3D-printed plastic, injection-molded plastic, bent sheet metal, and machined metal.
Injection molds were machined in Minnesota and we decided to test three different plastics for the enclosure cover to see how they held up to impact and abrasion. The latest boards were built using these molded covers and the newest PCB revision, and they've been delivered to our second group of beta backers. Barring any unexpected issues, we'll make one last minor revision to the PCB to improve manufacturability, and then ship it and the current enclosure design on all our Kickstarter production boards. 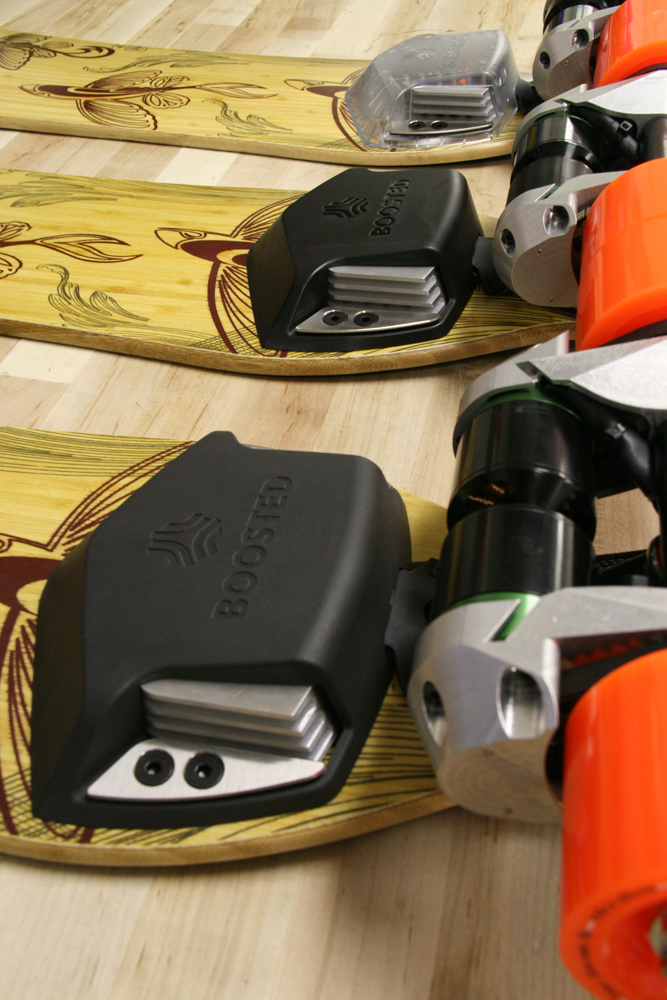 Three varieties of plastic covers (glass-filled nylon, regular nylon, and transparent polycarbonate from front to back).
As you can see, this is a complex process, thanks to a combination of factors like unique electronics and software, thermal limitations, and demanding environmental conditions. But the end result is a functional, lightweight, reliable, and beautiful electronics package. 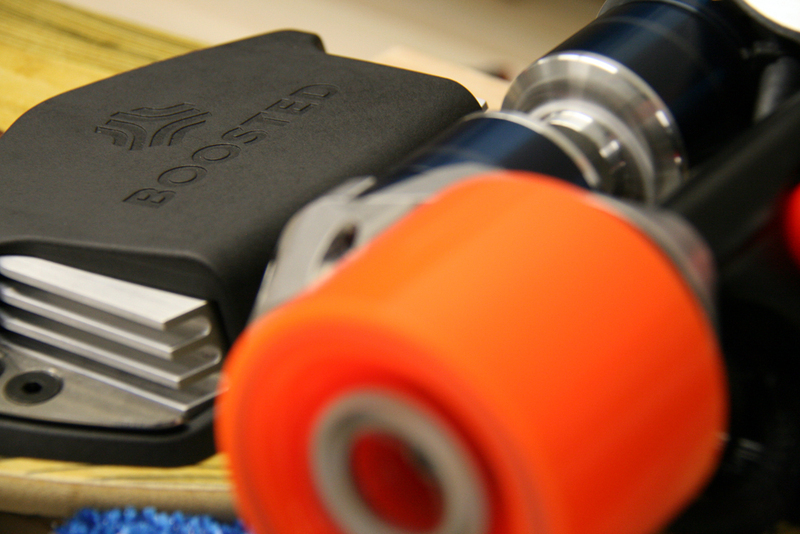 We'll soon have similar blog posts about our drivetrain, battery, and remote as those get finalized... stay tuned!

In the meantime, for progress on our beta testing and manufacturing, check out our update.